I walked into the kitchen and saw my mother hang up the phone, a worried look on her face.

“It was your sister. She said one of the ambulance drivers for the medical office she works for is in a deep coma because of a gas leak in his trailer last night.”

“Wow… Will he recover soon?” I asked hopefully.

But as the weeks wore on, the young man failed to give any sign of life, and the doctors began to lose hope. The next time my mother asked after him, the decision had been made to disconnect life support.

Hearing of this decision, I felt a sudden rush of confidence: I remembered America Needs Fatima was launching a national drive to promote the Medal of Our Lady of Graces, a special devotional given to St. Catherine Labouré in an apparition of the Blessed Virgin in 1830. Coined to the exact specifications of Our Lady, so many blessings, graces and miracles have been granted to those who wear it, that it has consequently become known as the “Miraculous Medal.” 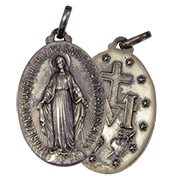 “We need to get a Miraculous Medal to him!”  I told my mother. She enthusiastically agreed. My sister thought it a good idea, and asked a colleague of the sick man to deliver a medal to the hospital to be placed under his pillow (regulations forbade any metal on patients).

As we prayed, and shortly after the devotional was placed under his head, something incredible happened: the comatose began mumbling! The decision to disconnect life support was put on hold.

A few weeks later, the young man was released from the hospital and soon returned to work. He warmly thanked my sister for sending him the devotional and confided in her that he believed the Miraculous Medal saved his life.

In 1830, Our Lady appeared to St. Catherine Labouré and entrusted her with the mission to have the Miraculous medal made.

“All who wear it will receive great graces; they should wear it around the neck.

Graces will abound for persons who wear it with confidence.”

View all posts by restaurarencristo